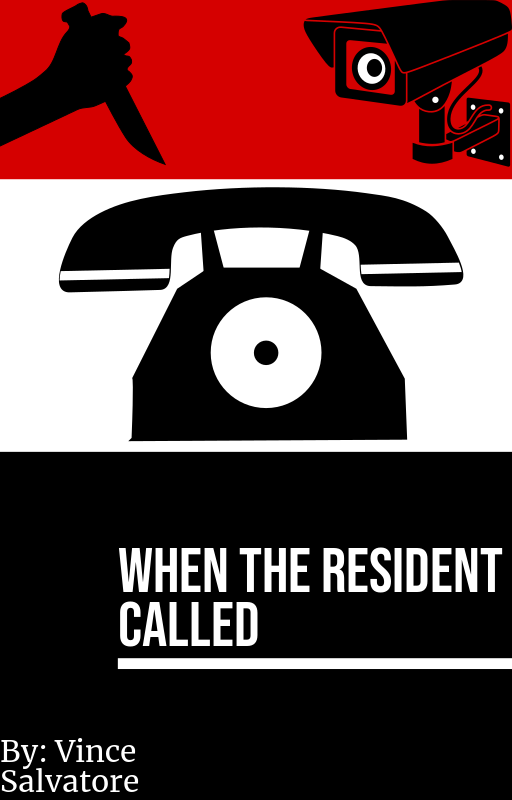 When The Resident Called.

They say the crazies like to come out on a full moon. If the moon is full, and seems to have a slight reddish glow around it, that seems to scare the stars to the point that only the moon lights the night sky. Then you should expect the gates of hell to open up. Especially in a city like Toronto, where anything can happen.

Tom Reed had been a security guard and concierge for condos around the city for over ten years. After ten years of working the downtown core from low to high-end properties, there is little he hasn't seen. Of course, you can't have 1200 people living in a building and expect nothing to go wrong. Ask anyone in his line of work, and they will have an almost endless number of crazy stories. But there will always be that one situation that nothing could have prepared them for.

Tom Reed sits alone, monitoring the security cameras at his desk. He greets a few residents walking by, dressed for a long night out on the town. Tom checks the time on his computer screen. It is 10pm, and he will not be at the desk when they return.

He's done all his patrols, and all packages have been logged into the system. His hourly log was updated. There was nothing suspicious on camera. No noise complaints. Just a few food deliveries that need to go up to the units. Some guest parking passes were printed out, with a few residences picking up their packages. It was a Thursday night, however, in Tom Reed's experience, some residents liked to start the weekend early. Up until that point, it seemed to be a quiet night, that is, until the phone rang. Strangely, the phone had been dead silent for the last hour, but that all changed.

"Good evening, concierge desk," Tom answered in a pleasant tone. "Eric Boone, unit 1402, get up here right now. She's trying to stab me. Get this psycho out of here!", the resident said before hanging up the phone abruptly. Tom quickly searches for the man in the system to confirm it. Eric Boone, sole owner and resident of unit 1402.

Tom thought the resident was exaggerating. It was probably a standard couple's dispute. There was no one else on file, so he expected to just ask her to leave and maybe need to call her a taxi. "She must be new," Tom thought. Then he wondered if Mr. Boone called the police. If she really stabbed him, that is what he should have done.

The elevator took what felt like forever. Tom wanted to get the girl to leave a.s.a.p, the sooner, the better. You never want to leave the desk for too long as a guard. Residents, especially board members, always wanted to see a guard at their post. It made them feel safe. Also, it proves you are not in the breakroom sleeping.

The elevator finally arrives, and Tom briskly walks in. Tom's heart rate starts going up. In his experience, domestic disputes are very stressful situations to deal with. At least, in this case, things were black and white. She is not a resident, so she needs to leave. The cabin finally arrives on the 14th floor and the elevator doors slowly open. He can hear the sound of a fist pounding against a door. Peering into the hallway, he sees the female Tom perceives as the resident's girlfriend, banging on the door and demanding to be let in.

The resident had thrown her out of the apartment in the time it took for Tom to arrive. 'She must have some personal effects still in the room,' Tom thought. She very clearly wasn't happy, refusing to leave and demanding to be let back it. She continues to bang on the door, even after repeated warnings that the police have been called. A warning the resident was yelling at her through the door. She was so caught up in the moment she did not even notice Tom standing in the hallway. As Tom walked toward her, he could see neighbours opening their door and popping their heads out to witness the drama unfold. Tom could see a few of the neighbours liked the real-life drama. Others quickly opened their doors, told her to shut up and, just as quickly, closed them. As Tom walked by a few of unit 1402's neighbours, he politely suggested staying in their units, and he would handle the disturbance.

Tom stood to the right of her. "Pardon me miss. You are not a resident. You are disturbing the peace. I need you to leave the premises," Tom said with a stern yet still polite tone. A tone of voice that was both strict and kind you pick up on the job. Mr. Boone heard Tom's voice and was now silent. She then transfers attention to Tom with the knife still in her hand. The resident had neglected to mention that part. Tom knew she tried to stab him, but not that she still had the knife. Tom stares at the blade, afraid to take his eyes off of it. It was a long, sharp steak knife with blood on it.

Tom backs away a few steps. "Miss, I need you to put the knife down and leave the building at once." Tom tried to keep a straight face despite his heart pounding in his chest like a steel drum.

"As Mr. Boone said, the police are on their way," Tom repeated, trying to calm her down. He continues to step back until he is about six feet away, hoping she can be reasoned with, however doubtful that possibility may seem. Sometimes part of his job was allowing people to vent out their frustrations. Unfortunately, she did not seem interested in talking it out.

His words did not seem to be getting through to her. Instead, she just looked at him with dark intentions in her eyes. Knife still in hand, a drop of blood dripped down from the blade and landed on the carpet.

That was the last straw for Tom. 'You know what. I don't get paid enough to deal with shit like this,' Tom thought, deciding flight was the right option. She was too far gone, so he made a run for the elevators. He jammed on the down button repeatedly. "Come on, come on," Tom whispered to himself. He believed one of the three elevators would promptly come to rescue him out of this crazy life and death situation. Slowly, the psychopathic girl starts to walk toward him, knife firmly at her side. The shirt she was wearing had bloodstains on it, but that was nothing compared to the expression of dark intentions on her face.

Tom starts to really panic now, jamming the button in a desperate attempt to get the elevator to come faster, but to no avail. He desperately hoped one would arrive soon, not wanting to opt for the stairs and have a psycho with a knife chasing him down fourteen flights. She keeps getting closer. Tom's heart keeps racing.

He fiercely presses on the button. "Come on, come on, come on," Tom quickly whispers to himself once again. Then a dinging sound. An elevator cabin just arrived. He looks to his right side. The woman with the bloody knife had picked up the pace. She is now on the smooth white tile floor of the elevator landing. Tom sprints towards the slowly opening doors. Once inside, he immediately presses the ground floor button, simultaneously holding his thumb on the close door button.  After a slight pause, the doors finally begin to close.

Tom sighs, thinking he is home free. With a sudden jolt, a hand reaches out and stops the doors from closing. Tom decides to go on the offensive. He removes both his black dress shoes with the hard square one-inch heels. He holds them, one in each hand, like a pair of war clubs.

The elevator doors now fully open, the psychotic girl starts to walk inside the elevator cabin. Tom sees his opening. He raises the first shoe above his head and brings it down on her forehead like a hammer. A popping sound echoes through the hallway. It's a direct hit, and she gasps. She is stunned. Tom quickly hooks the side of her face with the other shoe. The force of the impact turns her head to the side. Then, with her defenses down, Tom front kicks her, knocking her to the tiled ground, still with knife in hand. Tom presses down on the close door button with no time to waste. The doors squeak to a close and begin to bring him to ground level. Tom sighs in relief once more, and quickly puts on his dress shoes, knowing it is not over yet.

Once on ground level, Tom did not wait to get back to the desk. Instead, he takes out his phone and dials 911, hiding in the resident mailbox area to make the call. Once he confirmed that police were on the way, Tom walks back to the security and concierge desk. The phone was ringing, and there was a line of four people waiting for assistance. None of them looked happy they had to wait. He muted the phone immediately and quickly glanced at the cameras. Everything seemed to be okay.

"Where have you been? I've been waiting twenty minutes to get a parking pass," the visitor said in an angry tone. It was the boyfriend of the resident in unit 502. Tom instantly recognized him. He comes by a few times a week.

Tom's head did an angry twitch. Taking a second to calm down. "Are you already parked in visitor?" Tom asked politely.

Tom thought for a second, 'Who knows how many cars are parked in visitors without a pass". He knew he was away from the desk for quite a while. "For tonight, you do not need a visitor parking pass. There will be no parking patrol," Tom said, maintaining his polite tone.

"I cannot disclose that. Anything else?" Tom asked. The visitor said nothing and walked away. Tom keeps an eye on the cameras if he sees the girl with the knife. The following three people were residents that wanted to collect packages. They poked at Tom for more information, overhearing what he had said to the visitor. Tom continued to say he could not disclose. Maintaining a straight poker face.

The police arrive a few moments later, Tom directing them to the 14th floor. He checks the time. 'Almost there,' Tom thought. His relief had finally arrived. Once the desk was clear, Tom began to write his incident reports of the events that had happened. Knowing the police would like to talk to him once they had her in the police car. Ten minutes later, the police bring down the crazy and hopefully ex-girl friend of Mr. Boone. Though Tom did not know that for sure. Tom never wants to see her again.

As the police take her away in handcuffs, Tom made sure to hide the smile on his face.  The last thing he wanted was to give her a justification for revenge.