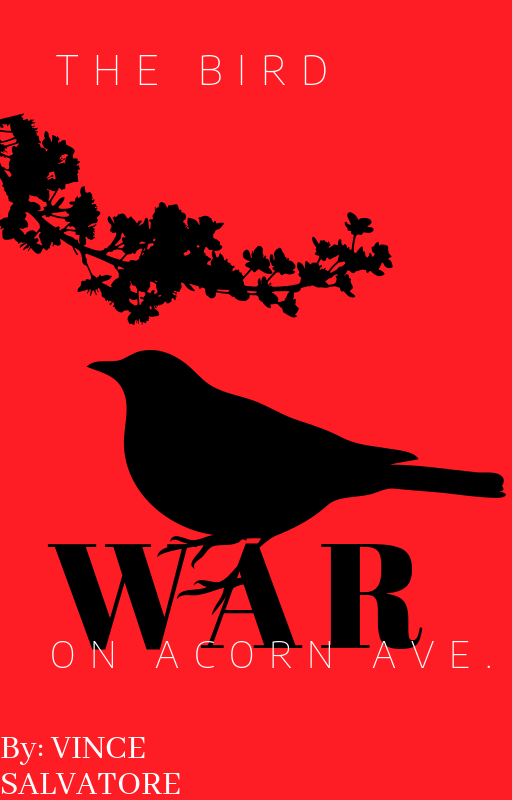 The Bird War On Acorn Ave.

Old man George Spears sits alone on his veranda, enjoying a beautiful summer afternoon on his quiet street. His wife passed away five years ago and now lives all alone. He was smoking a cigar as he watched the world go by, in complete peace and quiet. Then he hears it. An awful sound burned into his memory. A sound that has now ruined an otherwise perfect day. A sound that makes his blood boil. He knew it all too well. The birdcall of a Red-Winged Black Bird. For old man George Spears that birdcall is a declaration of war.

His mortal enemies had returned at around twenty in number by the looks of it. George clenched his fist. 'The flock was bigger than last year,' he thought angrily. He takes an angry drag of his cigar. They have returned to nest on Acorn Avenue. Last year, one of the birds quickly flew down, pecked on his head, and retreated into the tree before George could get his hands on him. The wound drew blood. He called the city to do something. However, they said there was nothing they could do. They advised Mr. Spears to be patient, and the birds would go away. Almost a week passed before the flock left. He could hear the Red-Winged Black Birds from inside his home, shrieking and attacking anything that happened to be walking on the street or enjoying the comfort of their backyards. Cats, dogs, people, birds, even birds of more significant size than themselves. Anything was fair game.
​
Last year, for the first few days, George tried to tough it out and ignore them. He tried to go for a walk on the second day, and they attacked when his back was turned. One of them getting a quick peck at his head. A standard hit and run. On the third day, he had a seat in his backyard. At first, it seemed peaceful, and he was enjoying the beautiful summer weather. He thought he could ride out the situation from there. After all, a Toronto summer is something not to be wasted. Then one bird from the flock spotted him. The bird flies in close and shrieks at him. These birds prefer to attack when your back is turned. Mr. Spears was forced to endure the relentless harassment, to the point it was easier to stay inside. Forced to confine himself to the inside of his home. Until the invaders from the sky left.

They were nesting on his street again, and no one was safe. A man holding a coffee happens to be walking past George’s home, entirely focused on his cellphone without a care in the world. The warning signs were there had he bothered to listen. The shrieks became louder as he got closer. Then a Red-Winged Black Bird that had locked onto its target from a tree swooped in, flapping its wings, gave two quick pecks to the head before retreating. The man cried out in pain, dropping his coffee and cursing to the sky. "What the fuck was that."

Finally looking up to see what had attacked him. Some birds shrieked as others called out, partly hidden in the trees and the tops of streetlights. Another bird in the trees darted for him. He tried to slap it away, but the bird was able to stay just out of reach, shrieking. In a way, trying to communicate that Acorn Avenue now belongs to them. Finally, he realized they would not stop, and he made a run for it. The birds follow him for over a block. Swooping down and shrieking. Frightening the man as he ran, before finally losing interest.

George saw two Red-Winged Black Birds chasing a hawk above a few houses. They were trying to peck at the hawk's body as they were chasing it away. George could not believe it. The hawk was almost three times larger than one of these Red-Wing Black Birds, yet the hawk was flying away scared. Not even trying to fight back.
The Red-Wing Black Bird's reign of terror was far from over. They now focused on a woman walking her dog passing through Acorn Avenue. George wanted to warn her, but one look at her, and he knew he would be wasting his time. She was wearing a pair of wireless headphones. Shaking her head and hummed to the music. She was walking on the other side of the street. She also had on a pair of sunglasses and a baseball cap. Getting her attention would be next to impossible. Her dog was a Bernese mountain dog. He was not a puppy but still looked young.

A flock member immediately spots them from the top of a streetlight and quickly calls the flock. The birdcall catches the dog's attention intently, as his owner is still lost in the music. At first, the dog is silent, looking up toward the source of the sound. Finally, one of the birds flies within two feet of the woman and shrieks, wanting to scare her away. The dog starts barking aggressively as his owner flinches. She felt the Red-Wing Black Bird fly past her head.

She sees her dog looking up, barking and prancing around. She finally turns off the music and pulls the leash closer to her, momentarily forgetting about the bird. "Relax. Relax, Max," she said in a concerned voice. She leans over to pet him. Unfortunately, her back faced the sky at an angle, leaving herself open for attack. George shook his head in disapproval, taking another drag of his cigar and continuing to mind his own business. "What's the matter Max?" she said as she gently patted her dog, still trying to calm him down.

Seeing an opening, a Red-Wing Black Bird shoots down at full speed. Quickly pecking at her back before just as quickly retreating into the trees. She jolted herself back up, crying out in pain and accidentally letting go of the leash. The birds called out to each other. A few of them shriek as they fly overhead. She looks up, and Max, startled by the noise, runs away. She quickly chases after him calling out for Max to stop.
George looks on. She catches up to him before reaching the end of the street. George shook his head. "They're more aggressive this year," he thought. He rests his cigar on his ashtray, which lay on the ground beside his chair. He dug into his pocket for his cell phone and quickly searched for foods toxic to this type of bird species. Once he finds the answers to his question, George calls his grandson.

"Hello, Alex. Sorry to bother you. I need an urgent favour," George asked with a sincere tone.
​
"Sure."

"Great! I need you to order me a few things online. I'll give you my credit card number."

The next day, early in the afternoon, George hears the Red-Wing Black Birds shrieking, then a loud thump at his front door, quickly followed by a louder knock. Then some more shrieking. As expected, George opens his front door and to a large brown cardboard box. The items Alex had ordered for him yesterday had finally arrived. Alex did not asking any questions. He thought his grandfather was looking for a new hobby.

George quickly picks it up, locks his front door, and charges excitingly to the kitchen. He slowly pulls the box's contents, one piece at a time, laying each one carefully on the table. Salt, apple seeds, garlic powder, bird feed, and lastly, two bird feeders. He looked at the items displayed neatly on his hardwood kitchen table. "Don't worry, City of Toronto. I will handle this my way," he said in a whisper.
He prepares the bait. Mixing the bird's feed with the salt, apple seeds and garlic powder for good measure. 'These birds are greedy and will eat anything,' he thought. George sets the alarm clock on his phone for 4 am.
​
The following day, George takes one fully loaded bird feeder and walks to the tree located at the front lawn with a stepladder and some string. It was quiet on Acorn Ave. All his neighbours were sleeping. In his experience, the birds in his neighbourhood all wake up at 5 am. George ties the birdfeeder to the tree in the front yard. Once the bird feeder is secure to the tree, George stands there looking at it. He realizes he may kill some innocent birds in the process and starts having second thoughts. 'Have I gone too far?' He thinks to himself.

Then he thinks about all the evil these birds do. Forcing him to hide in his own home in the summer. The people and animals they attack and the memories begin to anger George. 'These birds do not deserve to be forgiven or a pardon for their crimes. They attacked me first. They started this war, and I will finish it. So be it if a few innocent birds are unintended casualties of this war,' George thought to himself.

George immediately gets off the stepladder. "I wasted enough time," he whispers angrily to himself. Then heads for the backyard to set the second birdfeeder. He threw a little clean birdfeed on the ground near the birdfeeders to try to lure as many Red-Winged Black Birds as possible. By the afternoon, the Red-Winged Black Birds were swarming the birdfeeders. George happily watched them eat as he smoked a cigar.

George wakes up at around 6 am the next day. It was quiet. Then he takes a cup of coffee and goes to check his front yard. The moment he steps on the grass, an ear-to-ear smile appears on his face. The bodies of the birds litter the ground. Then he realized he needed to dispose of the bodies. George quickly runs inside. He grabs a large black garbage bag and a pair of gloves. He had to clean up the mess before his neighbours noticed and asked questions. Lucky for him, it's garbage day today.