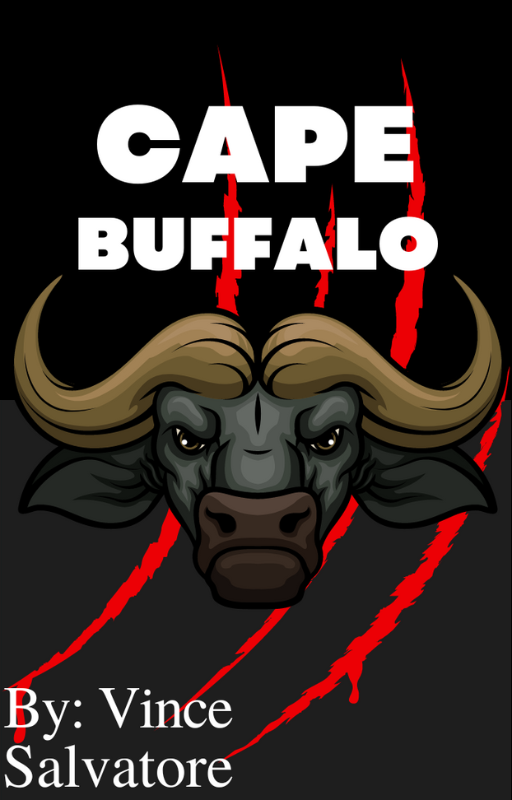 On the plains of Tanzania, East Africa, a beast known as the Black Death grazes alone on a patch of golden grass chutes. A massive beast known for injuring lions. It was a cape buffalo recently separated from its herd during a stampede caused by a pride of hungry lions.

One may think a beast almost seven feet in length and nearly seven hundred pounds in weight would have nothing to fear, but you would be gravely mistaken. This bull’s herd had been grazing through lion country. This bull keeps a watchful eye as he feeds in case the lions decide to return. Even though the bull is alone, he is still dangerous, armed with a set of flesh-piercing horns sitting squarely on his head.

Of course, being so large makes it impossible to hide from three lions on the hunt spotting him right away. Watching him graze as they slowly approach him. The hunting party consists of two large four-hundred-pound males and one two-hundred-pound female. The strategy of the lions is to tire the bull out before going in for the kill.

Then one of the lions charges toward its prey as its head is down. The lion boldly leaps onto the back of its enormous target, digs its claws deep into its hide, and then bites down on its spine. The Cape buffalo cries out, moving wildly in all directions to shake off the predator. The lion fights to hold on, but the beast is too strong and is thrown off its prey, landing hard on the dry earth. The lion takes a moment to recover. The other two lions surround the buffalo, trying to get in close to latch on.

However, the buffalo sees the other two lions coming. The buffalo twists and turns wildly, keeping the lions at bay. The buffalo lowers its horns and goes on the attack, thundering toward one of the lions. The lion tries to dodge the buffalo’s attack. However, the buffalo’s curved horn tucks under the lion’s belly. Knowing its horn has caught the lion, the buffalo fiercely swings its head up toward the sky tossing the lion a few feet in the air before the lion takes a hard landing on the dry ground, knocking the wind right out of him. The lion takes a moment, painfully lifting himself up.

The other two lions continue the attack from the front. Clinching to the Cape buffalo from the sides attempting to stop it from escaping. Seeing the danger in front of him, he lowers his horns and thunders forward, forcing the lions out of his way. The buffalo runs as fast as he can to try to escape the lions. However, the lions continue their pursuit.

The three lions chase after the buffalo, desperate to prevent their prey from escaping. Taking down this prey would be no easy feat, for the buffalo was determined to survive. Once again, implementing the same strategy, the female and one of the male lions attack from the flanks as the remaining male attacks the center rear.
The hunting party catches up to the buffalo and then gets in front of him, blocking his escape and forcing the Cape buffalo to slow down. Both lions try to latch on from the buffalo’s flanks. However, the buffalo forcefully shrugs the lions off. With the Cape buffalo momentarily halted, the rear lion strikes. Leaping onto the buffalo’s back, he digs his claws into the beast’s hide and bites down hard on the buffalo’s spine. The buffalo cries out in pain, leaping back and forth in a circle to shake the lion off, almost like a revolving teeter-totter, far too dangerous for the other two lions to lend a hand. Furiously shaking the lion like a bull rider. The lion bites down harder, trying to hold on. However, the bull is too strong, and the predator is forced off. The lion once again takes a hard landing on the dry Serengeti earth, kicking up a cloud of dirt on impact.

The male lion strikes from the left flank. He latches on to the buffalo’s hide and bites into his side, successfully slowing down his prey. The buffalo is tired but continues moving forward, dragging the lion’s feet on the ground. The cape buffalo begins moving wildly to try and shake the lion off. However, not with the same power as before, for the herbivore was starting to tire.

Seeing an opening, the female attacks head-on aiming for the throat. She latches on to the left side of the beast’s massive head and neck and attempts to bite down on the throat. The buffalo counters by lowering and raising his head fiercely, shaking the lioness’s body up and down. With the point of the horn finding its way through her chest. The pain is so intolerable that the lioness is forced to let go of the buffalo and is tossed into the air, painfully landing on the ground where she would remain.

The buffalo once again leaps up and down wildly, eventually shaking the lion off. The buffalo decides to go on the offensive, this time charging at the lion. The lion cannot get away in time and is caught between the buffalo’s horns, thrown violently into the air, and lands painfully on his side, crying out in pain.

The buffalo begins charging at the lion. Though in pain, the lion quickly stands up and runs away, narrowly avoiding those flesh-piercing horns once again.

Finally ready to get back into the hunt, the other male lion runs to confront the herbivore. The cape buffalo quickly turns his attention toward the other lion and goes on the attack. The lion flees, and the tables have turned in favour of the herbivore. The predator has now become the prey. The buffalo charges toward the lions, and the lions run for cover. When the buffalo is sure the lions have abandoned their hunt, he escapes, escapes to rejoin his herd, having survived the encounter with many scars though still alive. The end.